Avril Lavigne and Nickelback frontman Chad Kroeger's relationship has been so quiet that few even knew they were dating. Now, after a six-month courtship, the Canadian rockers are engaged to be married, Lavigne's rep tells PEOPLE exclusively.

Lavigne, 27, and Kroeger, 37, first got together in February to co-write a song for Lavigne's upcoming fifth studio album.

"A romantic relationship blossomed as they spent time writing together," a Lavigne pal tells PEOPLE.

On Aug. 8, Kroeger popped the question, presenting Lavigne with a 14-carat diamond sparkler.

"He makes her so happy," a family source tells PEOPLE. "Both of their families could not be more excited."

It will be Kroeger's first trip down the aisle, and the second marriage for Lavigne, who split from Sum 41 frontman Deryck Whibley in 2009. She had also dated Brody Jenner.

Avril and Brody broke up in january

It appears Avril Lavigne and Brody Jenner have said goodbye to their relationship.
A source confirms to E! News that the rocker and Jenner have split, after dating for almost two years.

While details of the breakup are being kept under wraps, we're kinda wondering what they're going to do about their matching tattoos (they inked each other's names on their bodies shortly after they began dating).

Jenner, whose romance with Lavigne began in early 2010, showed off a tattoo of the "Wish You Were Here" singer's name on his arm in July of that year. Lavigne debuted her matching tattoo of Jenner's name on her torso the same month while they were both on the beach in Malibu. 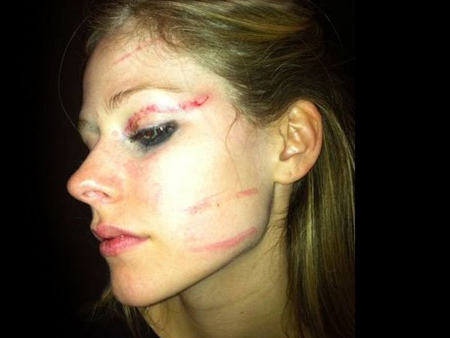 Last weekend, Avril Lavigne was unfortunately in the middle of a fight that broke out at the Roosevelt Hotel in Hollywood, and the “Best Years Of Our Lives” singer revealed that she recieved a “black eye, bloody nose, hair ripped out, scratches, bruises and cuts.” A picture is worth a thousand words, and today we get a look at Avril’s injuries — and all we can say is yeouch! “Wanted to thank all of my fans, friends and family for their support over the last couple of days,” Lavigne tweeted out. Hopefully Avril is feeling much better by the time she performs at the Macy’s Thanksgiving Day Parade. LoL

Avril gets her ass handed to her.

Pretty much, she was out with her boyfriend and five people attacked them. According to Avril she was left with a black eye, scratches, bruises, cuts, a bloody nose, and had hair ripped out. Amusing article, but it would have been better with pictures.

Now I'm off to go Google this Brody Jenner dude (her boyfriend). I've never heard of him, but I imagine he'll be good for a laugh.

I noticed last night that Avril Lavigne has now joined the ranks of lame celebrities to be a spokesperson for Proactiv. I laughed.

The commercial showed pictures of Avril's bad skin too, and it's funny because I always thought her skin was absolutely atrocious, especially considering that even her makeup artists can't hide her acne.

So much for Avril Lavigne's happy ending.

The punky pop princess has confirmed what the rumor mill already knew—she and Sum 41 frontman Deryck Whibley are separating after three years of marriage.

"Deryck and I have been together for 6 and a half years," read a statement on Lavigne's website.

"We have been friends since I was 17, started dating when I was 19, and married when I was 21. I am grateful for our time together, and I am grateful and blessed for our remaining friendship.

"I admire Deryck and have a great amount of respect for him. He is the most amazing person I know and I love him with all my heart. Deryck and I are separating and moving forward on a positive note. Thank you to all my family, friends and fans for all your support."

Well, what did you think Lavigne was going to say? "I'm sick of this s--t, don't ask why"?

But though Lavigne was fighting off pregnancy rumors as recently as last December, she her rocker hubby haven't been spending much time together for a while.

Her rep said last year that Lavigne and Whibley were "still together and very happy," but word on the street since then has been that the once happy-go-lucky pair spend more time fighting than partying.

(copied from ONTD, I lazy)
Someone should post pictures of Avril at the MMVAs. She looked stupid. And I am lazy.
Oi, does anyone remember how the general consensus of this community was that "punk rock died with Sid Vicious"?

Did anyone else grow up a little and realize how bloody stupid that was? The Sex Pistols weren't even that "punk" at all to begin with and real punk rock is still going strong.
I am quite surprised that this will be the fourth post made in 2008. This community isn't as dead as I originally assumed it would be.

But I'm disappointed that it took me a few minutes to remember how the fuck to make an entry in a community.

So me and who used to be "punklovesme" were reminising about the old days at  antiavril, I was over at thatsayssteak's LJ, reading all our old INSANE comments about when he deleted the comm.

After 5 years of the deletion of anti avril, I still miss you guys! I still talk to some of you too! Too bad this place never picked itself back up to its former glory. ;(
Collapse